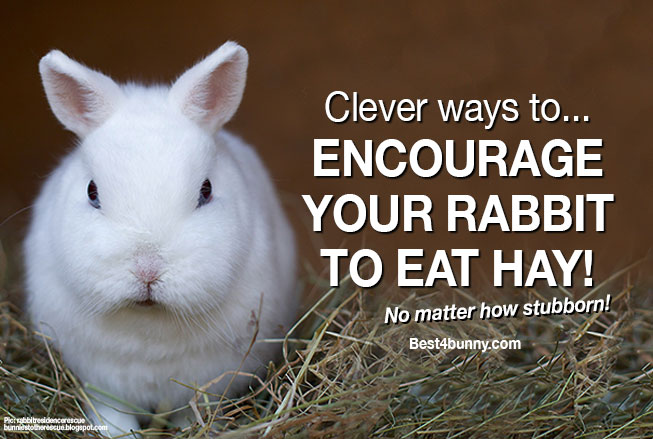 Rabbits need hay each and every day to keep them super healthy. But what do you do if your rabbit just won’t eat hay? When it comes to hay, every rabbit is different. The best you can do is to try and find out how your rabbit prefers to eat the hay and what type of hay they like to eat! To help you do this, we have put together some top tips to help encourage your rabbit to eat hay.

There are lots of different types & textures. Meadow and Timothy are the most popular, but you can try grass hay also. Avoid Alfalfa hay as this is very rich and is only really needed for young rabbits, or rabbits that need to gain weight.

Some bunnies prefer to eat off the floor and some like to pull at hay from hay racks. Try having both hay on the floor and in hay racks, to see what your bunny prefers.

Place a hay rack by the litter tray!

Rabbits like to graze on hay whilst pooping. So by placing hay next to their litter tray & in the litter tray too, will definitely help encourage them to eat hay.

Create your own hay racks!

This is so easy to do & cheap too. You just need a kitchen whisk and a keyring clasp. Stuff the kitchen whisk with hay and hang up near the litter tray in your rabbit’s enclosure. (If you don’t have a kitchen whisk, use a large bull dog clip instead) Small cardboard boxes, like tissue boxes, stuffed with hay are ideal too.

Stuff cardboard tubes with hay and one of their treats in the middle. They will enjoy tossing the toys around and they may eat a little of the hay while playing with them.

Always provide dust-free and fresh smelling hay. If the hay smells damp and fusty, they won’t want to eat it.

Never should your rabbit run out of hay. Rabbits like to graze throughout the day, in-between naps and especially late at night and very early in the morning, when you are probably in bed. So this is why you need to make sure they have access to hay 24 hours a day.

Change the eating hay every day!

Never wait for your rabbit to eat all of the eating hay, before you provide more. Rabbits will sort through hay and eat some bits and not others & become disinterested in it very quickly. Always provide a fresh pile of eating hay everyday & take yesterdays uneaten hay away & put it to one side for bedding hay.

Rearrange the hay morning and night!

If you rearrange the hay in the hay rack (by that we mean taking a handful and turn/move it around) your bunny will think it is new hay and this will keep them interested. Do this last thing at night, to encourage them to eat hay throughout the night & early morning, while we are sleeping.

*A rabbit should ideally eat the size of themselves in hay every day.

*The way a rabbits mouth moves, when eating hay, really helps to keep their teeth from overgrowing.

*Hay is full of fibre, which is what rabbits need to keep their stomachs healthy.

*Grazing on hay keeps rabbits occupied & stops them getting bored.

Feeding your rabbit too many pellets can discourage hay eating. Provide just a small handful of pellets for one rabbit & don’t worry if the bowl is empty. Once the bowl is empty, this is when they are likely to turn to their hay!

Please don’t worry if you think your rabbit is not eating any hay. Many rabbit pellets do have a small amount of hay in them (check the packet), so they will be getting some hay. Just keep encouraging them to eat more of the hay you provide. It is likely they are eating some hay, but at a time when you are not around.

To buy hay products in the UK click here

To buy hay products in the US click here